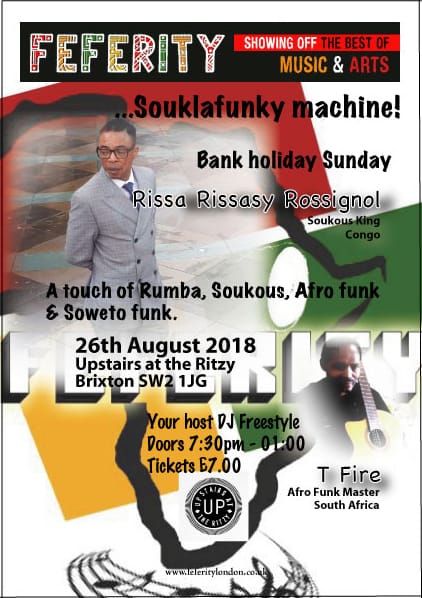 Rissa Risasy music journey started at the very young age of 14 in Bukavu with Shekeza, Grand Mike jazz and later in East Africa where he joined Apriso Ngoma, Maquis Original at Dar Es Salaam in Nairobi. He’s now settled in Britain where he has produced and performs at various venues in the country. His musical styles ranges from souk, Rumba to Afro-jazz. Very high energy rhythms. His lyric are based on love, and he holds women in high regard. In one of his radio conversations Rissa Rissasy said “my wife is my belt.”

South African born Themba (T-Fire) Matebese moved to London with his parents age 6. He later relocated to Nigeria to meet his father an head of one of the Lagos’s premier schools, and his mother a doctor. T-Fire as he’s well known is also a multi-instrumentalist.
Due to the difficult political climate in Ghana during the late seventies/eighties many musicians left for a better life in Nigeria, and amongst them were the Nyaku twins. They struggled to find a way to return to the studio until they encountered Themba Matebese who provided the gateway to a new incarnation of Basa Basa and, subsequently, the recording of “Together We Win” which you can find on the latest album HOMOWO.

This is one of Feferity’s many unbelievable cutting edge line-up of music, beauty and extravagance. If you love African music and love to dance, then make this a date & bring a friend!

Your host is DJ Freestyle, and DJ Mastakut from Back2back FM.