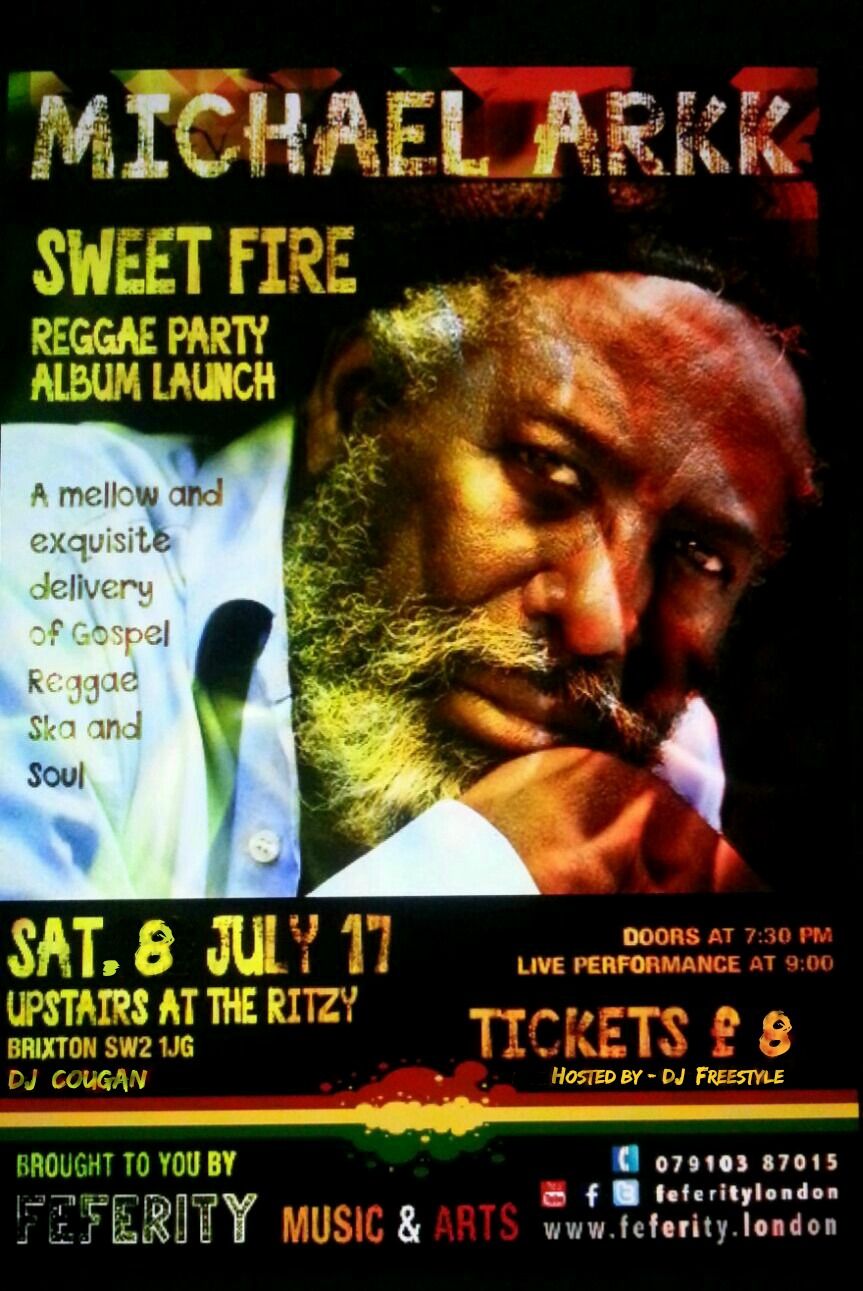 This time another exciting reggae band on stage to keep the diaspora of music alive with Jamaican born lead singer Michael Arkk.
Michael has been recording and performing his brand of sweet melodies for over 25 years. Within those years he has reached as far as Europe with his trademark vocal rendition and exquisite sounding voice so enriching, compelling with persuasion to forget about life’s worries and dance!
London based Michael has worked with an illustrious set of writers, performers & musicians like Owen Grey, Ray Carless, Neville Staple of the specials etc. Michael Arkk is signed to Numen Records (www.numenrecords.co.uk), and his new album “Sweet Fire” scheduled for release in June 2017. There’ll be album give away, so come early.

Feferity is proud to invite London’s top reggae DJ Cougan at the Ritzy who’ll rotate body to a good start. DJ Cougan has a veteran of community radio playing the lastest and best of throwback reggae music. He understands exactly what tickles music lovaz on the dance floor. He started his schooling in Kono the Eastern province, and further his Â secondary education in kenema. Â Sahr Jay migrated to England Â to further his Education in Multi-skill construction, but at the same time been encouraged to pursue his dream which is in music and acting skills.

Sahr Jay is a versatile artist who’s passionate in various style of genres. He sings Afro, Reggae and Gospel songs coupled with his Acting skills. For sometime now he has been working on his debut album which we’ll have the opportunity to hear on the 8th July. What about Artiste/DJ Deoba Authentic?
His vocal rendition is a fusion influences and can be describe as soulful African. Deoba Authentic is able to brings the tropical fusion of Nigerian music together with funk, soul house, garage and tropical vibes it into the Afropop beats with ease. In listening to his music, you start off hearing a sonorous soul vibe that spills into funk, rhythm and blues with jazzy backtones also with all that hiphop/reggae undertones and all of the aspects of music that make you want to move, groove, shake and sing along.

Deoba Authentic the artiste is simply so…authentically Afro with a touch of nothing but the best.
Deoba Authentic feels music a powerful tool enjoyment and more importantly, music is a very strong medium that can carry information and also preserve it for year to come and other will be able to learn from it now and in the future.

He was awards Best Radio Personality of the year for Nigerian Uk Based Achievers Award 2013 and also received a GAB Awards for excellence in entertainments in 2013, International Achievers Awards 2014 Best Male DJ. Beffta Special Honorary Award for Contribution to Entertainment Business. So we welcome Deoba on to Feferity and we look forward to seeing him perform on the 8th July One of the more serious artists in the UK. Â Born inÂ East London UK, grown in East Bronx and NewÂ York. Born by a Jamaican mother, TheÂ OnlyÂ D.2.1 is a melting pot of several musical influences. Â After spending time traveling around the states (LA. VA. FL.) Â D.2.1 has been settled inÂ London since 2004. Â Honing his skills from North, South, East and West London as well asÂ touring all across the UK with his family of entrepreneurs D21 has carved a unique soundÂ and has shifted over 65,000 CDs across the country. Â

With performances from California toÂ Poland, we are not looking at a rookie but an unrecognized talent. Â FrequentlyÂ recognisedÂ for his unique American Jamaican English accent D21 has gatheredÂ goodÂ support from theÂ UK urban industry, however movers and shakers in the scene has always supported andÂ respected his grind. Â

DealReal, Dark-N-Cold and other ukhiphop meccas is where u wouldÂ find him networking and rapping. Â 4th quarter 2014 D21 is retaliating with not 1 but 2 EPsÂ an 2 mixtapes. Â This man wants it bad. Â Prepare D.2.1 means determined to win.

Uniquely enough with such lineups we’re all bound to win on the of reggae 🎶!! Â