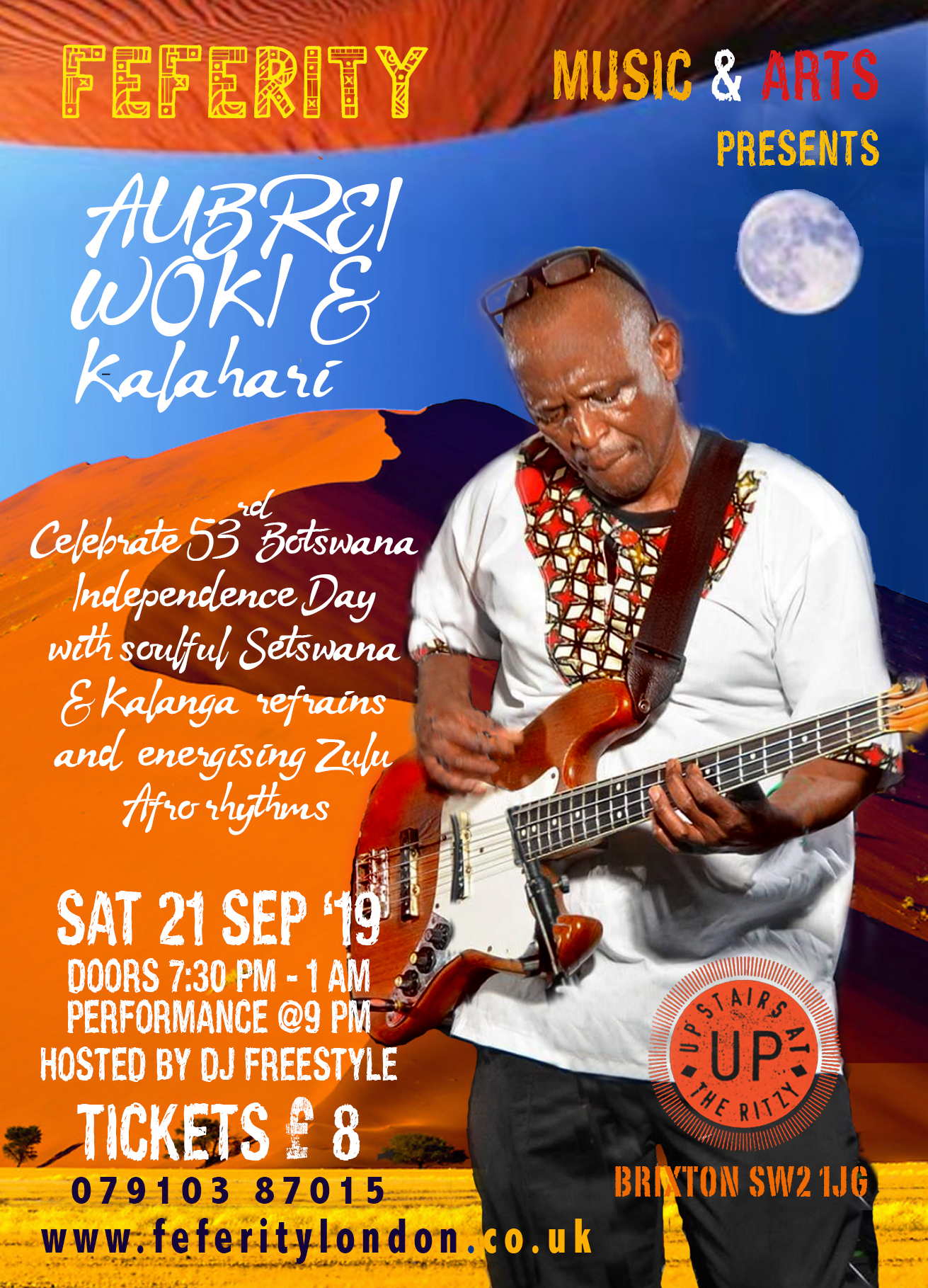 Feferity presents Live band from Botswana Upstairs at the Ritzy, with the unsung legend, bassist and founder of Kalahari.

Born in the village of Tsamaya, Aubrey Woki, a young pragmatic leader at 15, wanted to leave an impression on his home town of Gaborone. So he did, making his own banjo at the age of 7 and going on to become one of the best bassists in Botswana.

Gaborone was the hub of live music in the 80s. Every Friday there were hardcore revellers who crossed the border from South Africa into Gaborone to party.  This was when South Africa was in political turmoil. The African National Congress (ANC) had established an Arts Wing based in Gaborone called Medu, which was an organisation for writers, artists, and performers for South African exiles. Bands like Shakawe and Kalahari were the products of this freedom struggle arts movement.

In the 1980’s when Hugh Masakela returned from America was exiled in Botswana in support of the anti-apartheid movement
He lived and collaborated extensively with Aubrei Woki in Gaborone.

Woki had already established himself as a bass player of reckoning having collaborated with the erstwhile vocalist and guitar talent of the day, Whyte Kgopo, at Mother and several other musical undertakings, before he led the formation of Kalahari when legendary guitarist John Selolwane returned from Malawi.  The Kalahari band was formed with a virtuoso cast of Whyte Kgopo, John Selowane, Banjo Mosele and Woki on guitars, Gino Maposa on saxophone, Bullie Tsienyane on drums with Rampholo Molefhe and Lekofi Sejeso on piano.

The style was Mbaqanga, a Zulu word for steamed cornbread, and was the sound of the resistance, it fused marabi and kwela influences.  The cyclic structure of marabi is melded with traditional dance styles such as the Zulu indlamu, combined with American big band swing.  Immediately Kalahari band grew in Gaborone town, and they were able to tour neighbouring countries like Zimbabwe, Tanzania, Zambia.

For 30 years Woki was a bassist of choice for the likes of Hugh Masekela, Dudu Pukwana, The South African Gospel Singers, Township Express and Lucky Ranku and Pinise Saul. Aubrei Woki dedicated his life to music for Africa, for the world, and on par with many great musicians, the likes of Peter Gabriel, Winston Mankunku and Paul Weller who is a close friend.

We invite the discerning lover of music to come be part of Feferity’s memorable events, showcasing performances from Africa’s music pioneers and upcoming artistes of promise. Expect a mix of known favourites and original new songs from the languages of northern Botswana, infusing the Ikalanga, Setswana and English lyrics into the genre of South African improvisational music.

Your host the formidable music selector and founder of  Feferity radio, DJ Freestyle. To get your tickets follow the Ritzy link https://www.picturehouses.com/cinema/Ritzy_Picturehouse/film/feferity-presents-aubrei-woki-and-kalahari-band