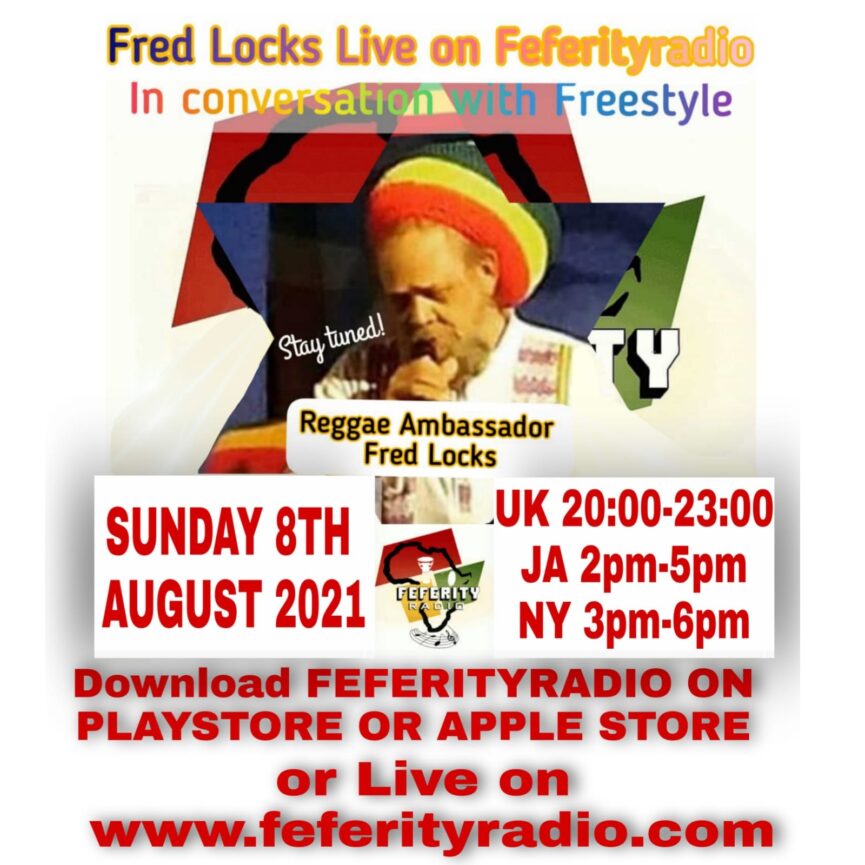 On Sunday 8th August, Freestyle in conversation with the reggae legend Fred Locks on Feferityradio from 8-11pm GMT.

Fred Locks, aka Stafford Elliott, was born on June 7, 1950, a Levi, the second of 12
children born to Ivan Elliott and Joyce Jackson. Fred’s love of singing was affirmed by his singing along with all the songs being played on the radio..

However it was at age 12 he wrote his first song “I THOUGHT SHE LOVED ME”, which he performed on an amateur festival with his school mates, Harvey Campbell, Donald
Allison and Junior Harvey. At that time they all attended Vauxhall Senior Modern School (now Junior Secondary).

Fred has a musical lineage, his father and eldest brother (both now deceased) were self taught guitarist(s). His brother was lead guitarist in a band called THE RIVALS who had musical genius Jackie Mittoo as a part of its aggregation. In 1967, Fred formed a group called “THE LYRICS” along with Delmar “Snaw” Campbell and Albert Tomlinson aka “Beenie Byrd”. That same year they recorded a song called “A GET IT” in the ska era for Coxsone’s Studio One Label. They did two other songs that year, “MONEY LOVER” and “YOU MADE ME SORE”. In 1968 they recorded two more songs on the Studio One Label “GIRLS LIKE DIRT” and “OLD MAN SAYS”

Fred started doing live gigs, mostly in his hometown Harbour View at an American – owned Club “Lemon Tree Lounge”. He was joined on stage by a female American artiste one night at the (LTL) to sing “YESTERDAY”, who commented that she never knew that Jamaica had such great singers. In 1969. Campbell migrated to the U.S.A. Fred and Tomlinson continued as a duo, still using the name, “The Lyrics”. They recorded four songs for Randy’s (now known as VP) The songs were, a rendition of “Bridge Over Troubled Waters, and three
originals: “Give Thanks”, “Heed to the Right”, and “Love That is Real”. Tomlinson later migrated to Canada in the early 1970’s. In 1975,

Fred launched his solo career with producer Boothie. He recorded the 10-track gem “BLACK STAR LINER” that became a mega hit both at home and abroad. In 1976 Fred formed another group called “Creation Steppers” they recorded two tracks, “Stormy Night” and “Life Is Funny”. Later they recorded an album called “Love and Only Love” distributed by Greensleeve. Fred Locks toured England in 1978 and the USA in 1979 both tours were successful.

Or you can catch up on mixcloud www.mixcloud.com/Feferityradio