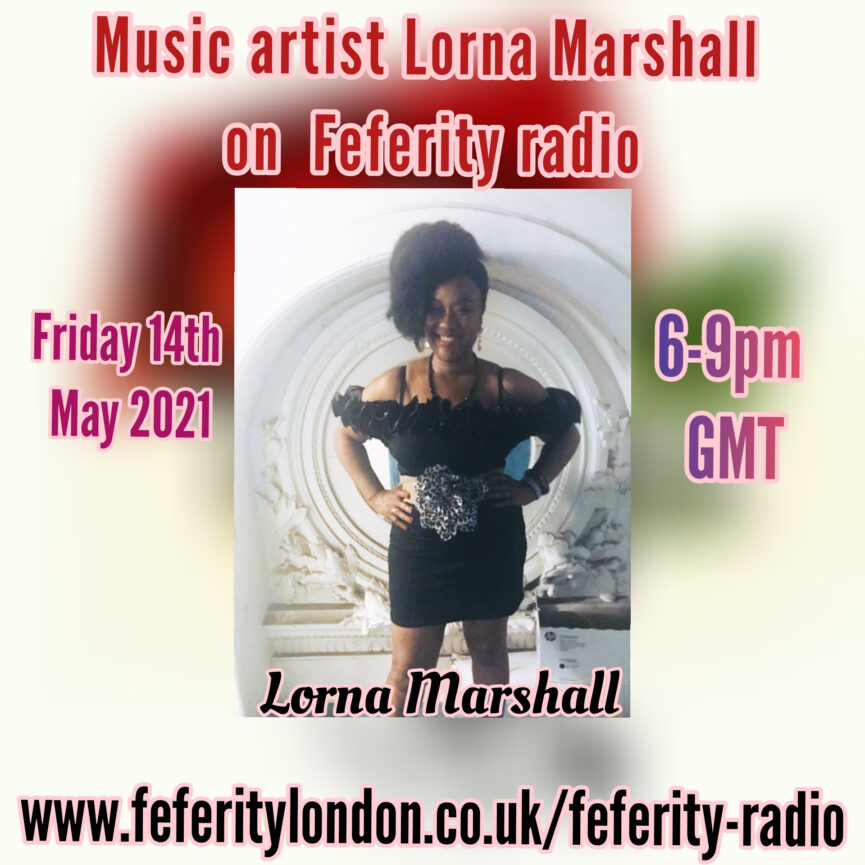 Friday 14th May 2021 at 6-9pm GMT, Lorna Marshall on Feferity radio in conversation with Freestyle.

Lorna always knew she was meant to be a singer. She quotes, “When I was a kid, I was always inventing little songs about my experiences,  I would look out of my window and write about nature as she see it.  Along the way, it became clear to me that music is my calling.”
In conjunction with her increasing international fan base, Lorna started singing in a local band. She also joined  The  Bethnal Fellowship Church Chior, together they appeared on BB1- Songs of Praise , with Lorna leading the chior singing ‘How Great Thou Art’.  She   expanded her music  by joining with  The Community Music Company  taking music into Schools and Universities . Whilst at the Community Music Company, she was trained as a improvised singer and a outreach worker.

During  a joint project between Community Music and The Guildhall  School of Music and Drama Lorna’s Singing and musical  talents were  identifed by The Guildhall,  which, resulted in her being  selected  as part of a group to teach   ‘Seach and Reflect ‘and improvision music  to  pre- examination students at The  Guildhall.   Whilst teaching Lorna decided to pursue a formal qualification in Jazz singing through the Guildhall, which she did.  Later graduated  with an  ‘A’Level Certiciate in  Soprano Jazz Singing. Lorna continued to include with Singing in Ciro’s Pizza Pomodora – live music and dining venue in Knightsbridge, and worked with the famous Italian dance music producer ‘Fargetta’ on Track called ‘ Your Love’ Featuring ‘Lorna”.

Lorna sang in ‘The Heart and Soul’ band performing the  Song  live ‘Respect’ at the London Palladium“and landed a record deal with Polydor.  The single  ‘‘Manifest your Love” DOP Featuring Lorna Marshall  voted as Number 1. as the Tune of the week (music week magazine). Last year Lorna performs in The 2019 Cannes Film Festival in the Cartel Hotel  (London Cabrat Club  based in Holborn) in the Hit Show called  ‘The Great Gatsby’ as one of the lead ‘Jazz vocaist’. Recently London Cabrat Club  won an award for the best live production. Lorna performs live at Zedels Crazy Coqs in London PiccadiIy  her own  show  ‘Celebrating 73 years of Aretha Franklin ‘it was a total sell out’. Lorna performs live in the Hit Musical ‘The Lion King’ as the principle role ‘Rifiki’ . In 1999 Lorna appeared on LWT tv singing with Diana Ross on the programe called Audience with…..
Lorna thinks of herself as a working Songstress/Educator ‘‘i have to sing and write constantly,” she says. This keeps me intouch with life.
check out lorna performing live at the Cartel Hotel, go to Lorna Marshall 7 instagram page, her own youtube page ljazzconnectus.co.uk

Join us Friday 14th May from 6pm, on Feferity radio your Nostalgic station. Feferityradio App is now available for download on Google play store. www.feferitylondon.co.uk/feferity-radio