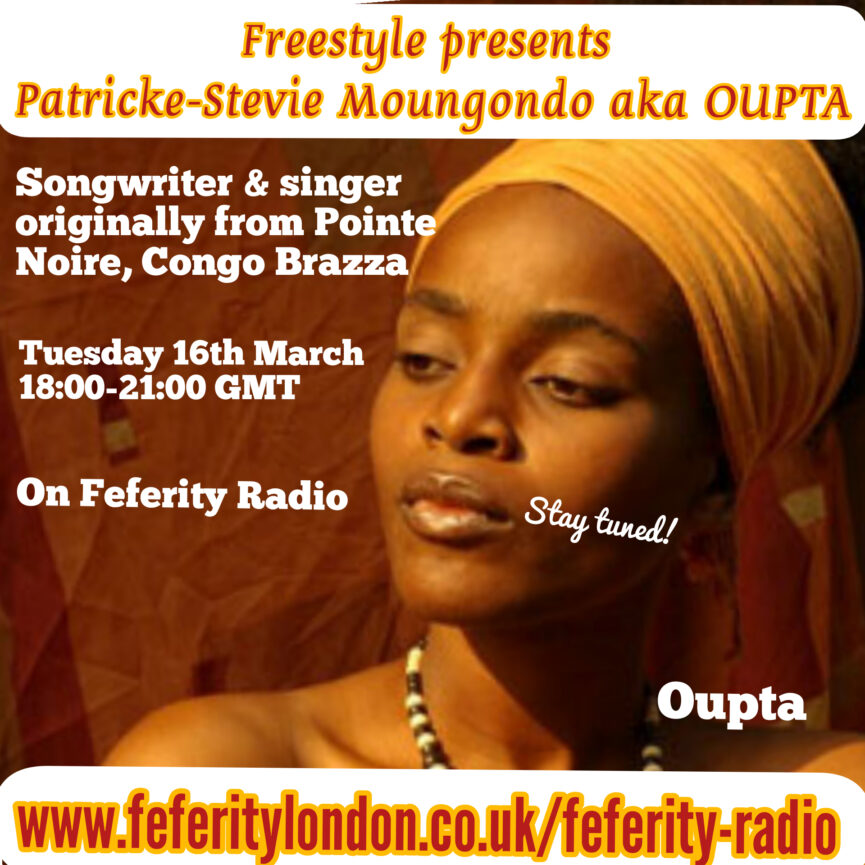 Born into a family of musicians, Patricke-Stevie Moungondo aka Oupta (“Patou” in verlan) stood out from the age of 10 within the Kilombo, groups of traditional songs typical of Congolese Protestant churches. She then joined the gospel formation Les Yohani before setting up in 1996, with her brothers and sisters, Les Kelouba, a group practicing a fusion of gospel and traditional Kilombo rhythm from the Congo.
Oupta then joined the Ballet Ngoma za Kongo directed by the choreographer Boris Nganga Bouetoumoussa and, in 2003, joined the group Lang’I (“Color” in Lingala) with which she recorded her first hit “Na wa tsetsa”, and participated in various festivals between 2003 and 2008: Fespam in Brazzaville, ACP Festival in Santo Domingo, Kolatier in Douala, MASA in Abidjan and Fest’horn in Djibouti. Oupta toured in Canada and Europe in 2007 and made several African tours between 2008 and 2011: Benin , Cameroon , Burkina Faso , Congo Kinshasa ).

Since the separation of Lang’I in 2010, Oupta pursues a solo career with his own Label Zik’Oupta and his own group (drums, percussion, guitar and bass). Placing herself resolutely in the lineage of the great black divas of jazz or soul (Billie Holliday, Mahalia Jackson, Aretha Franklin, Diana Ross), she sings about the relationship with nature, the place of women, the loss of loved ones. ‘a haunting voice imbued with kilombo spirituality.

During her concert at the Congo Ndule Jazz festival, Oupta pays tribute to one of her vocal references, Miriam Makeba , by performing “Pata Pata” in the company of the South African maestro and trumpeter Hugh Masekela , former husband of the South African diva. African woman nicknamed “Mama Africa”.