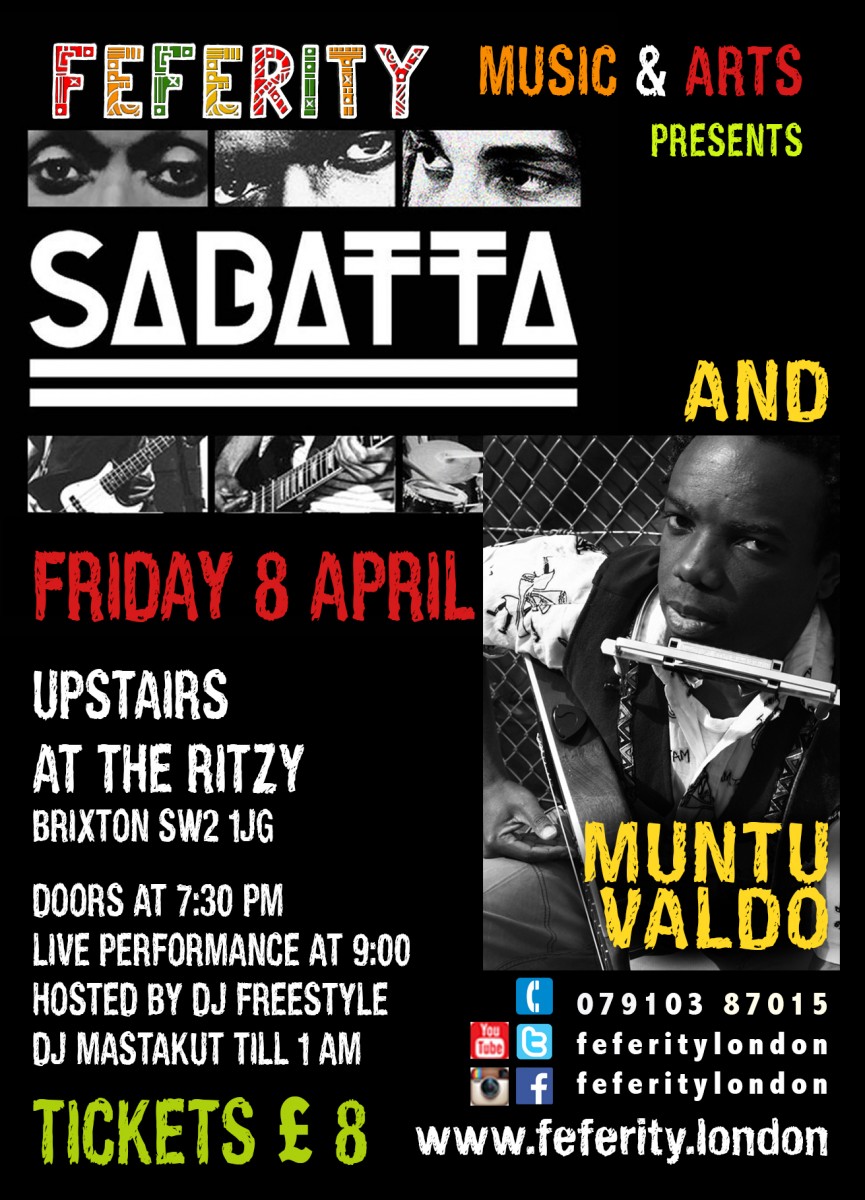 WE are proud to announce FEFERITY Music & Arts presents London Soul Upstairs at the Ritzy, Brixton on Friday, the 8th of April 2016, featuring the sophisticated sounds of SABATTA and the soul stirring and lyrical Muntu Valdo.

SABATTA is a South London band based in Elephant and Castle. Frontman Yinka Oyewole, Komla Ayewoh on bass and backing vocals and Adriano Siani on drums reflect the diversity of the cultures and communities in South London. Together they have developed their own style of music, referred to as â€˜Grunge Soulâ€™, a uniquely Peckham sound.

Their influences include The Stooges, QOTSA, Talking Heads, Dead Kennedys, Parliament, Funkadelic, Sly and the Family Stone, Elvis Costello, Bad Brains, Band of Gypsies and Fela Kuti. Together they form an amazing collective of influential musicians, impressing one by their extensive range of flavours.Â  Sabattaâ€™s new album â€œMiddle of the Nightâ€ was released in October 2015. The headline had their topical lead song â€œPoliticianâ€ which has been aired on various radio stations including BBC 6 Music in London, and in the summer of 2015 it was featured on AfroPunk.com. In the meantime why not get to know SABATTA by listening to https://soundcloud.com/sabatta/politician

Muntu Valdo journeyed from Cameroon to France, and is now based in London. Muntu Valdo is an exceptional musician and an orator of life experiences which are woven into his intricately crafted, often philosophical lyrics. The One & The Many addresses solidarity and the complex relationship between individual and collective.

Throughout the album there are numerous references to the struggle of humanity and community, country and continent, and it is clear that Muntu Valdoâ€™s worldview exceeds the limits of his own path in life. The singer, guitarist, bassist, percussionist and harmonica player has created a layered and lithe sound, Sawa blues which is at the root of many of his songs. Is a rhythmic and melodic sensibility that flows from the rich wellspring of timeless Cameroonian folk music, but this base is enriched by a wide range idioms that are part of the African diaspora, from Brazilian samba to American soul and jazz. The One & The Many is a bold and focused development of Valdoâ€™s ongoing exploration of the possibilities of Solo Artistry. The most important credit on his sleeve starts, â€˜all tracks are composed, performed and produced by Muntu Valdoâ€™. www.muntuvaldo.blackwhitesimple.com

If you would like to get your tickets early go